If you have a story about how your institution or organization is offering support for ITT students, please send it to communications@career.org to be added to this archive. 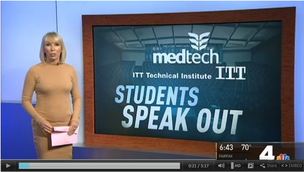 Click to watch the full interview.
"Earlier this fall, the U.S. Department of Education said it would no longer allow the school to enroll students receiving federal financial aid. Immediately afterward ITT closed 137 campuses in 39 states, stranding 43,000 students. The industry, meanwhile, says it's being unfairly targeted. In the middle are students who have paid for credits, and some are having trouble transferring them to other schools." READ MORE>>

The Center for Excellence in Higher Education, Inc. (CEHE), a nonprofit group of colleges and CECU member organization, has announced that they will launch a $1 million grant program in support of displaced ITT Tech students who want to continue their education.

“Our job is to help students – and actions speak louder than words. That’s why we’re offering $1 million dollars in grants to help ITT students,” said Eric Juhlin, CEO of CEHE. “We challenge other schools and community colleges to step up and offer similar grants to ITT students.”  READ MORE>>

"Many local higher education institutions have reached out to ITT Tech students, displaced when the campus closed earlier this week. Virginia College is taking it a step further, they’re offering scholarship money.
​
"While students were left in the dark about what would come next, Virginia College saw an opportunity. 'These students that have been going to class everyday for a period of time are now going to have their community gone so we decided to bring them into our fold for those that were eligible,' says Veronica Cram, the President of the Huntsville campus." READ MORE>>

"ECPI University has announced it will offer a “Trial Period” for eligible students displaced by ITT Technical Institute’s recent decision to close. Students meeting admissions and assessment requirements will be given the opportunity to take classes at ECPI University for two 5-week terms (10 weeks) before being considered for acceptance. 'At ECPI University, we put students’ interests first,' says ECPI University President Mark Dreyfus.

“'ITT Tech students have been put in a serious predicament. The U.S. Department of Education has advised former ITT students to not rush into a decision and review all options before continuing their education. ECPI University’s trial period allows them to do just that.'” READ MORE>>

​"NEVER MIND that the higher education plans of tens of thousands of students will be disrupted. Or that 8,000 people will lose their jobs. Or that American taxpayers could be on the hook for hundreds of millions of dollars in forgiven student loans. What is apparently of most importance to the Obama administration is its ideological opposition to for-profit colleges and universities. That’s a harsh conclusion, but it is otherwise hard to explain why the Education Department has unabashedly used administrative muscle to destroy another company in the beleaguered industry." READ MORE>>

"'It felt like home to me,” Laborin said. 'This school has been around since before I was born and now it’s gone?'" READ MORE>>

"ITT’s shutdown followed a regulatory ambush led by the Obama Administration. Liberals are rejoicing at the for-profit college’s wake because students will be able to start their education afresh and discharge their loans, never mind their lost time and foregone income. Who doesn’t want to spend more time in college?

"Veterans who are ITT students will also lose their GI benefits. Many students won’t be able to transfer their credits or find similar programs with flexible classes at nearby colleges. And the public education option—i.e., community colleges—is also often inferior."
...
"Ten years after entering school, ITT students typically make several thousand dollars more than those who attend community colleges. Earnings average $24,900 at San Bernardino Valley College and $35,200 at Irvine Valley College (a high performing community college) compared to $38,400 at ITT colleges nationwide. So while ITT grads incur higher debt, they are on average in a better position to repay their loans." READ MORE>>

CECU Members - if you are not receiving our emails and would like to, please contact us at communications@career.org.